The Blues of the Pays de Cocagne

Our guests are often intrigued by the little brown nut-like ball on the woad display in our Bed & Breakfast’s shop. It’s actually a replica of a coque or cocagne,made of woad leaves which are then crushed and moulded as part of the process for making the famous blue dye to which the region owed its prosperity and its name, the Pays de Cocagne.*

Dyer’s woad (Isatis Tinctoria) has been grown in Europe for centuries but its golden age was in the 15th century in the Lauragais area, the triangle formed by Albi, Toulouse and Carcassonne where the fertile land is ideal for growing the plant. The ripe leaves were harvested over several months, then crushed under a mill to form a paste and moulded into a ball which was left to dry and ferment to make the coque or cocagne – ideal for preserving the pigment during the long months as it was transported all over Europe. The dye craftsmen would then moisten the balls to make the pigment paste.

It takes 1,000 kilos of leaves to get just one kilo of pigment, which is how this “blue gold” made the region rich from the 15th to the 17th centuries. However, three years of poor weather ruined the harvests and woad was soon replaced by another plant: Indigofera tinctoria, or indigo.

Our next stop was the Château des Plantes where we tried out this alchemy (although the process has somewhat changed since the 15th century). During this educational tour we walked through the fields of the little green plant (although the flower is up to a metre high and yellow), visited the factory and machinery and learned about the precipitation and refining process and the dye itself.

We then mixed the blue liquid in the vat, overseen by the Master Dye Craftsman, then each dipped our piece of cloth in the dye and went home with an attractive and useful souvenir.

Did you know that there was more than one shade of woad blue? The longer you dip the cloth in the dye, the darker the blue. After each dip, the cloth needs to be dried to set the colour.

A T-shirt I dyed myself at the Château des Plantes

Admission price for a tour including a dye workshop (T-shirt provided) at the Château des Plantes: €15 –15 minutes away from our Bed & Breakfast and self-catering cottages.

*In medieval myth, the “Land of Cockaigne” was an imaginary land of plenty. 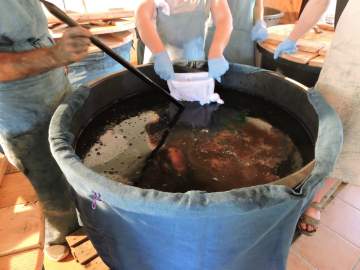 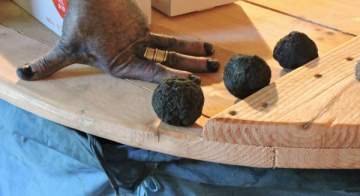 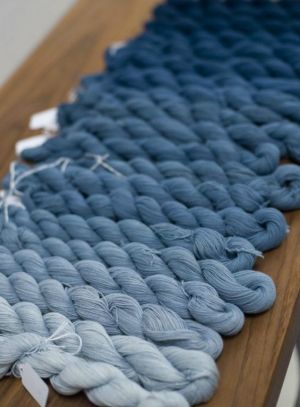 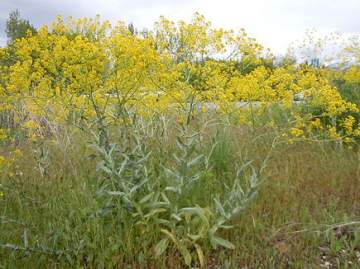 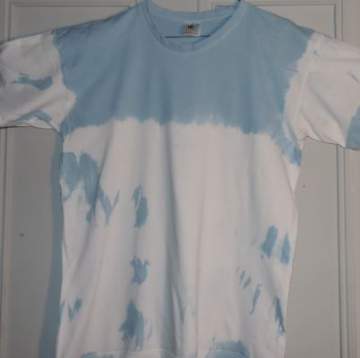 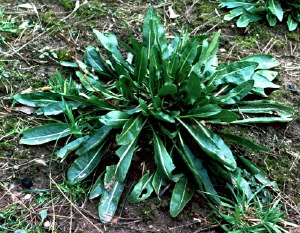